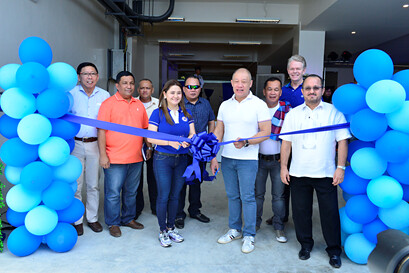 Globe Telecom is positioning Davao in the global connectivity map by aggressively building on its network infrastructure in the city that includes the construction of the Philippine end of an international undersea cable system, the only facility of such kind in the country to directly connect Davao with the rest of the world.

“Both facilities will help underpin local economic growth as it will provide support for the expanding business requirement for data not only in Mindanao region but also in the country as a whole. Both the data center and the undersea cable systems are critical in ensuring the resiliency of the country’s internet connectivity with the rest of world, particularly US, where much of internet content is sourced,” said Globe President & CEO Ernest Cu.

The two facilities will play a major role in providing the ideal IT Infrastructure and International connectivity requirement not only of businesses located in Davao, but also for enterprises in Luzon and Visayas in line with the company’s vision of enhancing business capacities of enterprises and help usher the Philippines to become a digital nation, said Cu. “Enterprises located in northern and central Philippines may consider the data center as the primary site for Mindanao and secondary site of Luzon and Visayas in the event of natural or man-made disasters, explained Cu, emphasizing that the two facilities will help strengthen the company’s overall network resiliency ensuring its customers will have seamless connectivity, and providing constant support for next-generation technologies.”

According to him, the data center, which is situated in the same location as the SEA-US cable landing station, will cater to BPOs, financial institutions, internet service providers and other content providers in southern Philippines. The project, once completed, will address ICT requirements of major trade and industry centers in Mindanao region, he emphasized.

Cu explained the Globe Business’ Davao Data Center is the best location for customers looking for a data center in the Mindanao region as it is located within the region’s central business hubs. He said the facility is Seismic Zone 4 compliant, which means that it has been retrofitted for earthquake safety. Also, infrastructure and redundant security solutions have been put in place to ensure that systems remain continuously available and secure. The data center is expected to be completed by the first quarter of 2017.

The SEA-US cable system, on the other hand, will ease the country’s dependence on international cable systems routed through northern Philippines, said Cu. This could prevent a repeat of a 2008 incident where major international cables were broken because of the Taiwan earthquake. As a result, the Philippines became isolated for a few days in terms of internet connectivity.

To date, Globe already completed the construction of the Davao Power Feed Equipment, a facility that will address the energy requirement of SEA-US cable system. At a project cost of approximately $250 million, the SEA-US undersea cable system will provide superior latency, delivering an additional 20 Terabits per/second capacity, utilizing the latest 100 gigabits per second transmission technology. Such additional capacity will cater to the exponential growth of bandwidth between the two continents.

The SEA-US cable is being built by a consortium of 7 international telecommunication companies, that include Globe Telecom and will link 5 countries and territories that include Manado (Indonesia), Davao (Philippines), Piti (Guam), Oahu (Hawaii, United States) and Los Angeles (California, United States). The SEA-US project will be approximately 15,000 kilometers in length, provides route diversity from the North Pacific, avoiding earthquake prone areas in East Asia. The cable system is expected to provide more efficient connectivity to approximately 1.5 billion people. Aside from Globe Telecom, members of the SEA-US consortium include PT Telekomunikasi Indonesia International (Telin), Telkom USA, GTI Corporation (a member of the Globe Group of companies), RAM Telecom International (RTI), Teleguam Holdings (GTA) and Hawaiian Telcom (HTEL).

In addition to the construction of the data center and the SEA-US undersea cable system, the telecommunications operator is also embarking on an aggressive deployment of fiber-optic broadband technology and utilization of additional spectrum assets such as those in the 700 megahertz (MHz), 1800 MHz and 2600 MHz bands in Davao City. Furthermore, Globe is also rolling out a fiber optic cable system in the country, including Davao. The objective is to create an internet superhighway by deploying fiber in 20,000 barangays by 2020 and provide ultra-fast internet access to around 2 million homes nationwide.