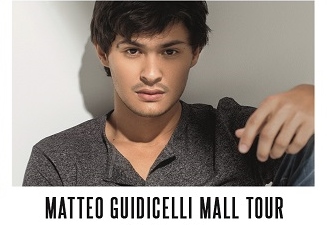 Guidicelli released his self-titled album November of last year. The album has three original songs—one of which is his first single, Ipapadama na Lang. It also features three covers—Apo Hiking Society’s Ewan, Regine Velasquez’s Sa Kanya and the classic You Fill Up My Senses.

Known for his racing career, Matteo has won numerous awards including being a three-time winner of the Karter of the Year award. He took up acting workshops at New York Academy. When he returned to the Philippines, he enrolled in theatre courses in Brent International School and started participating in plays. He also attended Columbia College in Chicago for two years to pursue a bachelor’s of arts degree in performing arts.

Catch the dashing Matteo Guidicelli on Saturday at the Event Center, 5PM. Get 1 VIP seat for every  Php 500 worth of spend mall-wide, including E-Plus top-up from SM Cinema dated February 10 to 12. Score a meet and greet pass with a purchase of Matteo’s album.

There are a hundred and one ways to celebrate Valentine’s Day. Make this weekend memorable at SM City Davao. For inquiries, call 297.6998 local 126. Like SM City Davao on Facebook and follow @SMCityDavao on Twitter or @SMDavao on Instagram for event and promo updates.