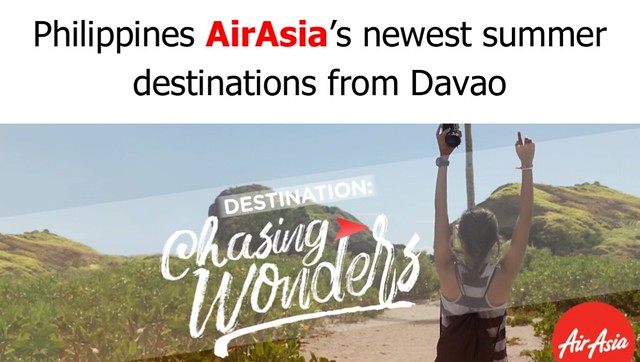 Air Asia expands network with new flights to Clark, Cebu, Palawan and Boracay via Caticlan this summer 2017 with promo fares as low as P398 are up for grabs now at their website www.airasia.com.

The hype is building up for AirAsia in Davao with brand new flights across the Philippines to usher in the summer season. The World’s Best Low COst Carrier for eight consecutive years formally opened its newest flights from Davao to Clark, Cebu, Palawan, and Boracay via Caticlan airport with promotional seats now on sale from as low as P398.

Philippines AirAsia CEO Captain Dexter Comendador said, “Davao is an important gateway to Mindanao and we are thrilled to bring Davao much closer to Norther Luzon via Clark, to Visayas via Cebu, and to the best island destinations of Boracay and Palawan.”

AirAsia is offering all-in promo fares from as low as P398 available now until promo seats last at www.airasia.com for travel period between April 22 to August 31, 2017.

Starting April 22, AirAsia will fly from Davao to Cebu – 2x daily; Davao to Boracay – daily; Davao to Palawan – 3x weekly; and Davao to Clark 4x weekly using Airbus A320s or jets which can accommodate up to 180 guests per flight. AirAsia also maintains 3x daily flights between Manila and Davao.

“The AirAsia Group has swiftly broken travel norms around the globe and has risen to become the world’s best now running for eight consecutive years by Skytrax which is the global benchmark of airline excellence. Our commitment in the Philippines is anchored on the same dream to make air travel more affordable, more accessible, and to provide only the best quality service that every Filipino deserves,” Comendador added.

As airline partner, AirAsia is offering low fares for its Manila-Davao flights including its latest routes from Cebu, Clark, Palawan, and Boracay to Davao to encourage more and more tourists to visit and enjoy Davao’s latest attractions. The agreement also includes joint marketing projects and activities to promote Davao across the Philippines and in AirAsia Groups massive network in ASEAN, Asia, Australia, and China.

AirAsia also presented its latest destination campaign titled #ChasingWonders, which aims to draw travelers to discover the rich beauty of the Philippines, its hidden gems, and pristine attractions in Cebu, Davao, and other island destinations.

“There is definitely great tourism and business potentials in Davao and Mindanao in general. We are here to provide the much-needed connections, tap into underserved markets, we aim to grow this and expand in the coming years. We are thrilled to paint Davao’s skies red,” Comendador said.

CHUCKS For A Cause